Yahoo - The Three Lions got three points in their first Group B match with a dominant 6-2 victory over Iran at Khalifa International Stadium on Monday. Five goalscorers contributed to the barrage as the team tied England’s record for goals in a World Cup match, a record they set in group play at the 2018 tournament.

Monday’s game got off to a slow start after Iran goalkeeper Alireza Beiranvand collided with center back Majid Hosseini in the eighth minute. Beiranvand was checked by Iran’s medical team, remained in the game for a brief period and was then removed from the match.

Once action resumed, it was all England.

Jude Bellingham, the youngest player on England’s World Cup roster at 19 years old, got the scoring barrage started with a header in the 35th minute.

Bukayo Saka added a second goal in the 43rd minute. A corner kick entered the box and went to Harry Maguire, who headed it in Saka’s direction. The 21-year-old then found the back of the net with a left-footed strike.

England wasn’t done in the first half. Raheem Sterling gave England a 3-0 lead when he knocked in a cross from Harry Kane. 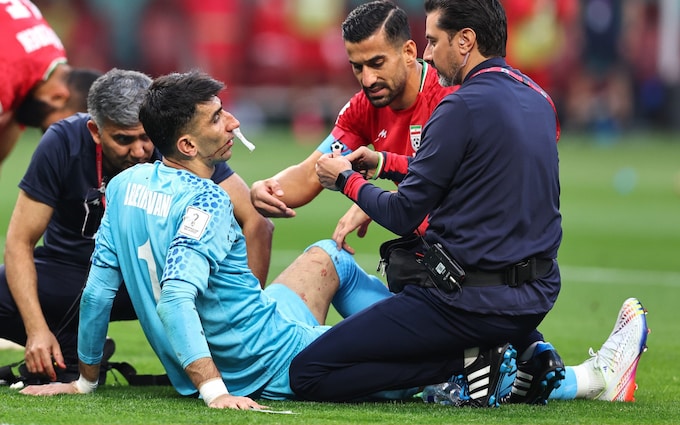 Saka added another goal in the 62nd minute. He again got to his left foot as he evaded Iran’s defense and ripped a shot past backup goaltender Hossein Hosseini.

Iran took away Jordan Pickford’s chances at a clean sheet with a goal in the 65th minute. The team maneuvered the ball into the box and Mehdi Taremi blasted it into the back of the net.

It wasn’t long before England built its lead back to four. Marcus Rashford entered the game in the 71st minute and immediately scored with a left-footed shot.

Jack Grealish put a bow on England’s clinic with a goal in the 90th minute.

Iran got one last goal before the final whistle as Taremi got a penalty kick past Pickford in the 103rd minute.

Next up for England is a highly anticipated match against the U.S. men’s national team at 2 p.m. ET on Friday. Iran will also play on Friday when it battles Wales in its second Group B contest. The USMNT and Wales will face one another to begin their World Cup journeys at 2 p.m. ET on Monday.

Today we have not any Birthday
Top